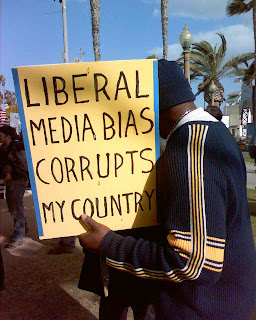 Whodathunkit! Liberals in the media have analyzed MSNBC and FOX News and found MSNBC is less liberal than FOX is conservative.

Those who cover media and follow television news contend that Fox News has a clearer political bent than MSNBC, strong ties to the Republican party, and a clear conflict with the paid employment of at least five potential GOP presidential candidates...

"Intellectually, are they more honest than Fox, I think they are," Eric Deggans, media critic for the St. Petersburg Times, said of MSNBC. "I saw that Fox was more consistent in reflecting a right wing tilt than MSNBC was in reflecting a liberal tilt. I think Fox is much more evolved in what it does than MSNBC does, in reflecting a political bent, it being right-wing."

The use of the term "Intellectually Honest" in a sentence about MSNBC is absolutely astounding. I doubt the liberals making this analysis have ever turned FOX News on.
Posted by Bluegrass Pundit at 7:44:00 PM