The Twisted Logic of Climate Change 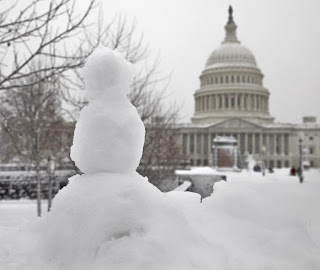 BERLIN, Nov 16 (Reuters) - Climate change could lead to colder winters in northern regions, according to a study by the Potsdam Institute for Climate Impact Research on Tuesday.

Vladimir Petoukhov, lead author of the study, said a shrinking of sea ice in the eastern Arctic causes some regional warming of lower air levels and may lead to anomalies in atmospheric airstreams, triggering an overall cooling of the northern continents.

"These anomalies could triple the probability of cold winter extremes in Europe and northern Asia," he said. "Recent severe winters like last year's or the one of 2005/06 do not conflict with the global warming picture but rather supplement it." (accent is mine)

It's bizarre watching you deniers unload your twisted logic that the names used to reference the scientific theory of anthropogenic climate change somehow invalidates it.

It's a living demonstration of a deficient education system.


- Last winter’s big snowfall and cold temperatures in the eastern United States and Europe were likely caused by loss of Arctic sea ice. In future, cold and snowy winters will be the rule rather than the exception in these regions. http://stephenleahy.net/2010/09/13/arctic-melt-down-is-bringing-harder-winters-and-permanently-altering-weather-patterns/

"It's bizarre watching you deniers unload your twisted logic that the names used to reference the scientific theory of anthropogenic climate change somehow invalidates it."

What invalidates the theory id evidence global warming has abated and we may actually be entering a period of global cooling for the next few years. What is bizarre is how global warming believers are trying to change the name to stretch their theory around any climate or weather event. Undoubtedly, the billions of dollars at stake are the motivation.