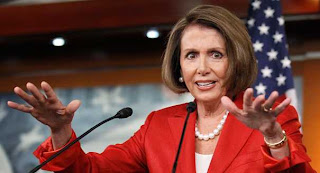 45% drank enough Kool-aid they want to keep her.

Democrats are divided over whether or not Nancy Pelosi should continue as House Democratic leader in the next Congress, according to a poll released Tuesday.

The results of a CNN/Opinion Research survey show that 47 percent of Democrats prefer that another Democrat lead the caucus and 45 percent want Pelosi (D-Calif.), the soon-to-be ex-Speaker, to serve a term as minority leader.