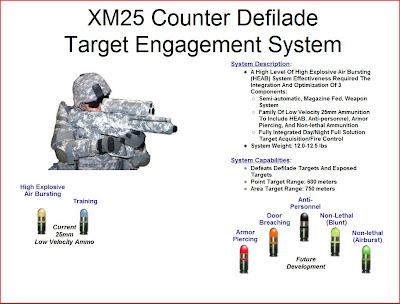 You can see some video of the new rifle in action here. It allows soldiers to shoot and kill combatants hiding behind objects. this could be a real game-changer.

(CNN)- Some U.S. soldiers in Afghanistan are using a “smart weapon” rifle that the Army hopes will be a “gamechanger” on the battlefield.

About the size of a regular rifle, the XM25 Counter Defilade Targeting Engagement System has the potential to neutralize an enemy, even when the enemy is hidden behind buildings or other barriers, said Lt. Col. Christopher Lehner, project manager for the XM25 with Program Executive Office Soldier.

The weapon can be set so that bullets will explode either on impact, in front or behind an object, depending on the way the weapon is programmed, said Lehner.

A soldier can use it to target and kill an enemy hiding behind walls, in a home, or other barrier from nearly 2,300 feet away, he said.