Interesting: Former RINO Lincoln Chafee is now the most unpopular governor in the nation... 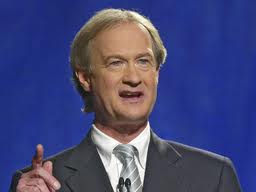 Lincoln Chafee has a net approval of negative 40 percentage points. He plans on running for re-election. Chafee was elected as an Independent after giving up the charade of being a Republican. How is that working out for you Rhode Island?


PROVIDENCE, R.I. (WPRI) - Rhode Island is finally at the top of a set of national rankings, but Gov. Lincoln Chafee probably isn't too happy about it.

Chafee is the most unpopular governor in the United States who's up for re-election in 2014, according to an analysis published Monday by The New York Times' influential FiveThirtyEight blog, which tracks political polls and projects election outcomes.

Chafee said Tuesday he still plans to run for re-election. "The election's a long way away," the governor told WPRI.com. A WPRI 12 poll last October found only 18% of voters definitely plan to vote for him again.