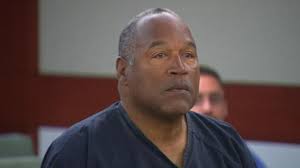 
He should be doing life without parole. I wonder if any African Americans actually still believe he was innocent?


After five years behind bars, O.J. Simpson has won a small victory with a Nevada Board of Parole Commissioners decision - but the former NFL star won't likely be leaving prison anytime soon.
The board on Wednesday approved Simpson's parole request on five concurrent sentences imposed in 2008 following his conviction for kidnapping and armed robbery of two sports memorabilia dealers at a Las Vegas hotel room.
But he still has more time to serve for other sentences ordered to run consecutively.
Simpson faces at least four more years - and three more parole hearings - unless Clark County District Judge Linda Marie Bell throws out his conviction and grants him a new trial.
Bell presided over a weeklong hearing in May, during which Simpson's current lawyers Patricia Palm and Ozzie Fumo argued that his trial attorney, Yale Galanter, botched Simpson's defense and had a conflict of interest in the case.