Almost half of Syrian rebels are linked to al-Qaeda or hard-line Islamists... 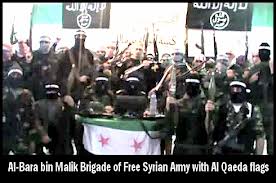 Another 30% are so called moderate Islamists, if there is such a thing. that leaves 20% as secular freedom fighters we would want to support.


Nearly half the rebel fighters in Syria are now aligned to jihadist or hardline Islamist groups according to a new analysis of factions in the country’s civil war.
Opposition forces battling Bashar al-Assad’s regime in Syria now number around 100,000 fighters, but after more than two years of fighting they are fragmented into as many as 1,000 bands.
The new study by IHS Jane’s, a defence consultancy, estimates there are around 10,000 jihadists – who would include foreign fighters – fighting for powerful factions linked to al-Qaeda..
Another 30,000 to 35,000 are hardline Islamists who share much of the outlook of the jihadists, but are focused purely on the Syrian war rather than a wider international struggle.
There are also at least a further 30,000 moderates belonging to groups that have an Islamic character, meaning only a small minority of the rebels are linked to secular or purely nationalist groups.
Keep reading…