Amusing: White House Petition for Obama to give his Nobel peace Prize to Vladimir Putin 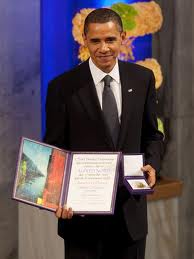 
Where as Mr. Obama made a sincere commitment to starting a war with Syria, engaging our military in unwanted conflict, and doing so without the support of his people we resolve that Mr. Obama should deliver the Nobel Peace prize given to him in 2009 to a man of Peace, the President of Russia, Mr. Putin. Where as Mr. Putin enabled the United States to avoid an unwanted and unwarranted military action he has brought us to the "brink" of peace.