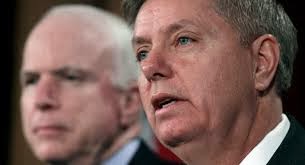 
A new Clemson University poll shows U.S. Sen. Lindsey Graham is having trouble with his Republican base here at home.
Clemson political science professor Dave Woodard conducted the poll last week and found only 31 percent of South Carolina’s Republicans plan to vote to re-elect Graham, regardless of who else was in the race.
“This is the lowest ‘re-elect regardless’ figure I have seen for any incumbent in 20-odd years of polling except for one other lower figure,” he said, adding that timing might have played a role.
The poll was taken one week after Graham and U.S. Sen. John McCain strongly supported a United States missile attack in Syria — a decision that 84 percent of the GOP base disagreed with, Woodard said.
Graham’s popularity was not as strong as South Carolina’s two other high-profile Republicans up for re-election next year: U.S. Tim Scott and Gov. Nikki Haley.