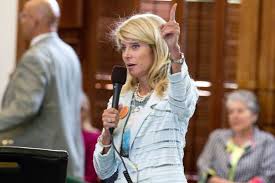 Democrats want to run "Abortion Barbie" for governor of Texas. I say, "Giddy up!"


Well, the Texas Democratic Party may be nuts.

The Texas Democrats of “white primary” infamy are lining up behind state Sen. Wendy Davis of Fort Worth as she mulls a run for governor. Texas has not elected a Democrat governor since 1990, and has not elected any Democrat to any statewide office in a generation. One would think that the Democrats in Texas would take a lesson from its decades of defeat and moderate toward the middle. That doesn’t seem to be in the cards.
.
Davis has become a national name thanks to her pink-shoed filibuster of a bipartisan abortion law that a majority of Texans support. The media made her a national darling among themselves, but she lost the fight and her protest devolved into madness and anarchy by the end of it. She is now known chiefly for that single unsuccessful effort, which will galvanize pro-life forces against her if she runs statewide. Coupled with the D after her name, then, Davis already has a couple of strikes against her. State Sen. Wendy Davis (D-Planned Parenthood) has a certain ring to it, in deep red Texas.
.
Now, it turns out that Davis wants to restrict gun shows across the state of Texas.
.
Jay Root at the Texas Tribune highlights an initiative that Davis undertook when she was on the Fort Worth City Council. Fort Worth, as in Cowtown, the home of the Stockyards and the city “where the west begins.” Davis tried, unsuccessfully, to impose new regulations at gun shows held in city-owned venues back in 2000. She also tried to force individuals who sell firearms at gun shows to perform background checks on their buyers. Keep on reading...