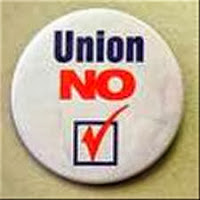 Lies, trickery and the support of democrats are the only things union have left.


Autoworkers at a Tennessee Volkswagen plant say they’ve been tricked into supporting a drive to bring in the union.
Workers at the two-year-old Chattanooga plant informally indicated support for bringing in the United Auto Workers, a decision that could pave the way for letting the powerhouse labor organization represent workers in collective bargaining. However, since Tennessee is one of 24 so-called “Right to Work” states, plant employees don’t have to sign up or contribute dues.
Now, some eight workers at the plant, which employs about 1,600, say they thought they were simply agreeing to have a secret vote on bringing in the union, when in fact, they were signing cards professing their support for it. The workers also say that when they objected, they were told they had to go to the local union hall in order to reclaim the cards. The National Right to Work Foundation filed a complaint with the National Labor Relations Board.
“There’s been a long history of bad actions in pushing workers into the union,” Patrick Semmens, vice president of legal information for the NRTW foundation, told FoxNews.com. “These workers were told that it was a secret ballot vote. They were being forced into the union illegally.”
Keep on reading…