Rick Perry to Maryland: “When you grow tired of Maryland taxes squeezing every dime out of your business, think Texas..." 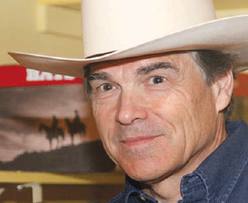 
Maryland is apparently the latest target in an ongoing campaign by Texas Gov. Rick Perry (R) to lure businesses and employees to the Lone Star State.
“When you grow tired of Maryland taxes squeezing every dime out of your business, think Texas, where we’ve created more jobs than all the other states combined,” Perry says in a new ad set to begin airing this week in the Washington region, according to WTOP radio.
Besides touting the economic advantages of his state, Perry also takes a shot at Maryland Gov. Martin O’Malley (D), who is weighing a 2016 White House bid.
“Unfortunately, your governor has made Maryland the tax-and-fee state, where businesses and families are paying some of the highest taxes in America,” says Perry.

I have a newsflash for Governor O'Malley,  Rick Perry not only has more hat, he has more jobs...
Posted by Bluegrass Pundit at 5:48:00 AM