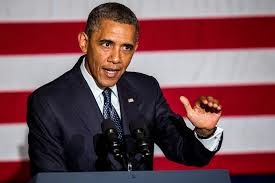 
President Barack Obama’s job-approval rating has fallen to its lowest level since 2011, reflecting the public’s disapproval of his clashes with Congress on spending and a growing opposition to Obamacare, two new polls have found.
According to the Bloomberg National Poll of 1,000 adults conducted Sept. 20-23, the president has a 45 percent job-approval rating, while a Gallup survey of 11,259 adults taken Sept. 1-22 gives him 44 percent.
The Gallup survey showed that the president is rapidly losing support within his own party.
While 78 percent of Democrats still give him a positive job-approval rating, he’s lost 13 points from a high of 91 percent in the month after his re-election.