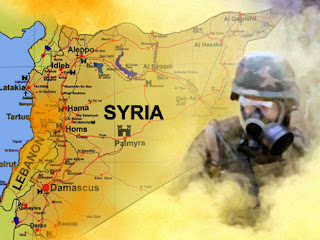 There is nothing to the Russian and Syrian offer except delay and games...


A secretive Syrian military unit at the center of the Assad regime’s chemical weapons program has been moving stocks of poison gases and munitions to as many as 50 sites to make them harder for the U.S. to track, according to American and Middle Eastern officials.
The movements of chemical weapons by Syria’s elite Unit 450 could complicate any U.S. bombing campaign in Syria over its alleged chemical attacks, officials said. It also raises questions about implementation of a Russian proposal that calls for the regime to surrender control of its stockpile, they said.
U.S. and Israeli intelligence agencies still believe they know where most of the Syrian regime’s chemical weapons are located, but with less confidence than six months ago, U.S. officials said.
Secretary of State John Kerry met Thursday in Geneva with his Russian counterpart to discuss a road map for ending the weapons program. The challenges are immense, Mr. Kerry said.