Sad: The Obama administration is getting ready to regulate your small town movie theater out of business... 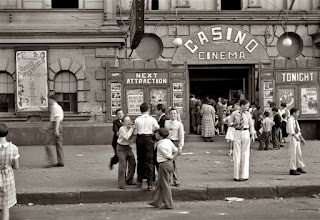 I dislike liberal  Hollywood and the brainwashing they are going, so I rarely go to the movie theater anymore. It is a shame to see an iconic part of America go the way of the dinosaur. They have already been hit by the conversion form film to digital.


The Obama administration is nearing completion of a proposal to require that movie theaters offer technology so blind and deaf people can go to the cinema.
The draft rule, which is part of a decades-long effort by advocates for people with disabilities, would likely require thousands of movie theaters across the country to offer devices that display closed captioning and provide audio narration of what’s happening onscreen.

Disability associations say that the new regulation will make sure that blind and deaf people can appreciate the latest blockbuster just like everyone else.
But theater owners worry that a federal mandate will force small, rural and struggling theaters to close given the costs associated with the rule.
“These theaters can barely stay in existence and often need community support to break even,” the trade group wrote in a comment to the Justice Department’s 2010 precursor to the upcoming proposal. “To require them to install expensive closed captioning technology at this time is an undue financial burden that may result in these theaters closing.”