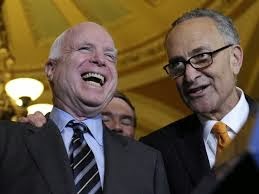 Voting to fund Obamacare is irrational unless you support it.


Sen. John McCain said Thursday that it is “not rational” to think the Senate will vote to defund Obamacare.

“In the United States Senate, we will not repeal, or defund, Obamacare. We will not. And to think we can is not rational,” McCain said on CNN’s “The Lead with Jake Tapper.”

McCain said that a government shutdown would negatively impact the American people’s view of Republicans and was critical of members of Congress who are pushing the strategy.