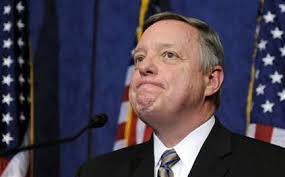 Dirty Dick once attacked on our military by comparing them to Nazis, Soviets or members of the notorious Pol Pot regime. I guess he let Republicans off easy.


Senate Majority Whip Dick Durbin (D-Ill.) told House Republicans to stop acting like “squealing political pigs.”
“We need to act like adults not like squealing political pigs,” Durbin said on the Senate floor Wednesday.
Durbin’s remarks were in reaction to a House Republican announcement that they would advance a government spending bill that defunds ObamaCare — something Democrats have said would lead to a government shut down.