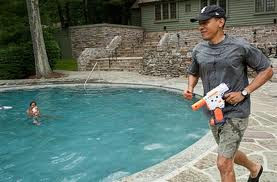 Would you expect any less?


President Obama called on Congress on Tuesday to revisit gun control legislation, saying in the wake of Monday’s deadly mass shooting at the Washington  Navy Yard that lawmakers should take what he considers “basic actions” to toughen the nation’s gun laws.
In an interview with the Spanish-language television network Telemundo, Obama said the country’s background check system for gun buyers is so weak it makes the United States vulnerable to mass shootings, such as the one last December that killed 26 small children at an elementary school in Newtown, Conn.”You know, I do get concerned that this becomes a ritual that we go through every three, four months, where we have these horrific mass shootings,” Obama said in the interview. “Everybody expresses understandable horror. We all embrace the families — and obviously our thoughts and prayers are with those families right now as they’re absorbing this incredible loss. And yet we’re not willing to take some basic actions.”