Reuters-Ipsos poll: 55 percent disapprove of the job Obama is doing as president 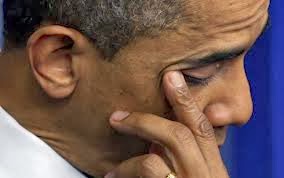 Only 39 percent of those surveyed approve...


As President Barack Obama’s signature Patient Protection and Affordable Care Act enters the all-important sign-up phase next week, the president finds himself with some of the lowest approval ratings of his presidency even as Republicans in an unpopular Congress maneuver to block the health-care legislation from taking effect.
A Reuters-Ipsos poll of 1,729 Americans taken Sept. 20-24 found only 39 percent of those surveyed approve of the job Obama is doing as president, while 55 percent disapprove.
The Reuters-Ipsos poll found that 22 percent of those responding thought the country was headed in the right direction, while 64 percent thought it was on the wrong track.