Guess what group Obama is refusing to negotiate with? 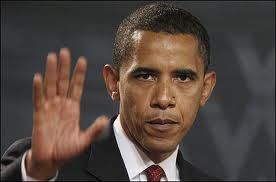 It's Iran Syria North Korea Russia  Republicans. Well, he has his priorities...


(Reuters) – President Barack Obama warned Republicans in Congress on Monday that he will not negotiate over an extension of the U.S. debt ceiling as part of a budget battle that will soon dominate Washington, with a deadline fast approaching.
Pivoting to domestic policy after devoting weeks to the crisis in Syria, Obama scolded his political opponents for threatening a government shutdown and attempting to attach conditions to funding the budget for the 2014 fiscal year that begins October 1.
“Let’s stop the threats. Let’s stop the political posturing, let’s keep our government open. Let’s pay our bills on time. Let’s pass a budget,” Obama said.
In a speech marking five years since the financial crisis that sent Wall Street teetering to the brink of collapse, Obama said much progress had been made in rebuilding the U.S. economy but much more remains to be done.