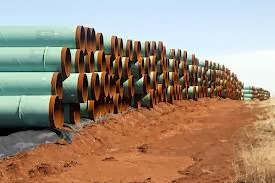 Canada tell Obama to sh*t or get off the pot on Keystone XL pipeline decision...


Canada bluntly told the United States on Thursday to settle the fate of TransCanada Corp’s proposed Keystone XL pipeline, saying the drawn-out process on whether to approve the northern leg of the project was taking too long.
The hard-line comments by Foreign Minister John Baird were the clearest sign yet that Canada’s Conservative government has lost patience over what it sees as U.S. foot-dragging.
Baird also conceded that Washington might veto the project, the first admission of its kind by a Canadian government minister.
The 1,200-mile (1,930-km) pipeline would carry 830,000 barrels a day from the Alberta tar sands in western Canada to the U.S. Gulf Coast. Ottawa strongly backs Keystone XL, which it says would create jobs and provide a secure supply of oil to Canada’s closest ally and trading partner.
“The time for Keystone is now. I’ll go further – the time for a decision on Keystone is now, even if it’s not the right one. We can’t continue in this state of limbo,” Baird said in a speech to the U.S. Chamber of Commerce.