Not a flashback to medieval times: Al-Qaeda fighters in Iraq cut off heads and place them on spikes... 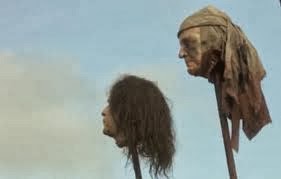 It seems some adherents of Islam are still living in the dark ages...


(Al Jazeera) — Al-Qaeda fighters have struck a bloody blow in scenes of medieval violence in Syria’s northern border-town of Jarabulus. Fighting came to a head on January 17, between rebel groups Liwa al-Tawhid Brigade and the al-Qaeda-linked Islamic State of Iraq and the Levant (ISIL) in the town, when reinforcements arrived from Raqqa and reclaimed the city in a brutal four-hour battle.
By nightfall, at least 10 men had been beheaded, their heads mounted on spikes, and more than 1,000 refugees fled the 3kms across the border to Turkey.
It’s a shocking turn of events for residents and Free Syrian Army (FSA) fighters alike, who just a week ago believed they were hours away from expelling the al-Qaeda group from their city altogether after surrounding the last 40 fighters in the city’s cultural centre.