Interesting: The Pope has a Harley... 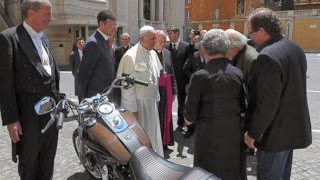 Yes.  Pope Francis has a Harley Davidson motorcycle and it's for sale!


Pope Francis is selling his Harley Davidson motorcycle.
The pope, known for riding through Buenos Aires on a bus and taking to the streets of Rome in a modest Ford Focus, plans to see the chopper auctioned off next month with the proceeds going to charity, according to the auction house.
The 1,585 cc Harley-Davidson Dyna Super Glide was presented to the pope as a gift from the motorcycle company in June 2013.