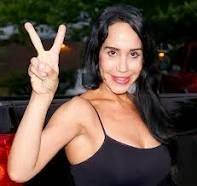 Nadya Suleman is innocent until proven guilty, but it is hard to have any sympathy for her. Any single woman who has eight children out of wedlock has very poor judgement.


LOS ANGELES (AP) -- Nadya Suleman, who gained fame as "Octomom" after giving birth to eight babies, has been charged with welfare fraud after failing to report $30,000 in earnings while she collected public assistance, authorities said Monday.
Suleman, whose real name is Natalie Denise Suleman, was ordered to appear in court on Friday, the Los Angeles County district attorney's office said in a statement. She was not immediately taken into custody.
Suleman was charged Jan. 6 with one count of aid by misrepresentation and two counts of perjury by false application. If convicted, she could face up to five years and eight months in jail.

Email ThisBlogThis!Share to TwitterShare to FacebookShare to Pinterest
Labels: Octomom