Gates: Obama had no passion for military, except for repeal of "don't ask, don't tell." 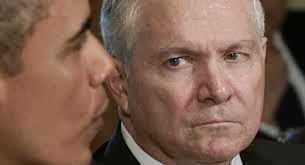 That's because Obama is a liberal and they secretly (or openly) hate the military.


Former Defense Secretary Robert Gates sharply questions President Obama's "passion" for military matters in his forthcoming memoir, and claims that practically the only time he saw that in the president was during his push to repeal "don't ask, don't tell."
The former Pentagon chief said in an interview aired Sunday that he was "disturbed" by Obama's "absence of passion" when it came to his military strategy. But in the book, "Duty," reviewed by Fox News, Gates hit Obama harder -- and in personal terms -- by contrasting his style with that of former President George W. Bush.
"One quality I missed in Obama was passion, especially when it came to the two wars," Gates wrote. "In my presence, Bush -- very unlike his father -- was pretty unsentimental. But he was passionate about the war in Iraq; on occasion, at a Medal of Honor ceremony or the like, I would see his eyes well up. I worked for Obama longer than Bush, and I never saw his eyes well up."