Guess who is obstructing Obama now... 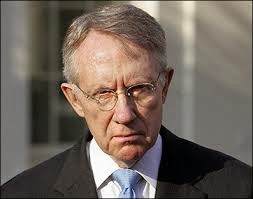 It's Harry Reid.  He must be a racist!


Senate Majority Leader Harry Reid (D-Nev.) said Wednesday he is not inclined to put trade promotion authority on the floor, less than 24 hours after President Obama called for action on the legislation.
Reid made clear he is opposed to the trade promotion bill — sometimes called “fast track,” which labor unions staunchly oppose.
“I’m against fast track,” Reid said of the enhanced trade authority bill drafted by Finance Committee Chairman Max Baucus (D-Mont.) that would speed up congressional consideration of trade deals.
Reid said he might not even let the bill come to the floor.
“We’ll see,” he said. “Everyone would be well advised just to not push this right now.”
“Everyone knows how I feel about this. Sen. Baucus knows. Sen. [Ron] Wyden [D-Ore.] knows,” he said in reference to the incoming chairman of the powerful Finance panel.
Obama exhorted Congress Tuesday evening to act on the proposal.