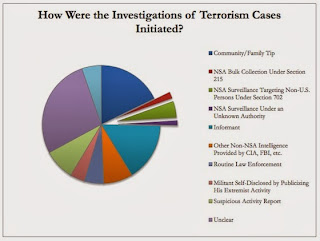 In the majority of cases, traditional law enforcement and investigative methods provided the tip or evidence to initiate the case, according to the study by the New America Foundation, a Washington-based nonprofit group.
The study, to be released Monday, corroborates the findings of a White House-appointed review group, which said last month that the NSA counterterrorism program “was not essential to preventing attacks” and that much of the evidence it did turn up “could readily have been obtained in a timely manner using conventional [court] orders.” Keep on reading