Nancy Pelosi on peoples perception of her: “You’d never know that I was an Italian-American grandmother.” 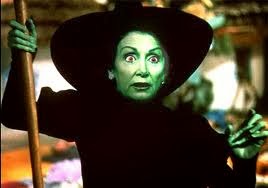 That's because she is a witch...


… Speaking of her “grandma” status, Pelosi used it as an example of something people have forgotten about her because of all the negative political ads.
“Look, I had probably $100 million mischaracterizing who I am,” Pelosi said at The Atlantic’s Shriver Report event at the Newseum. “You’d never know that I was an Italian-American grandmother.”
Her greater point was that more women don’t run for office because they don’t want to subject their families to similar scrutiny.
“If you reduce the role of money in politics and increase the level of civility in the debate, more women will run for office,” Pelosi pointed out. “And that’s a very wholesome thing.”