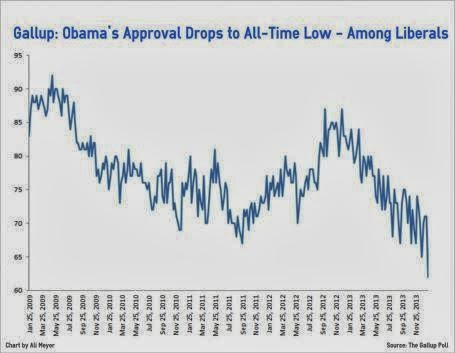 Nobody likes to support a failure...


President Barack Obama’s job approval sunk to an all-time low among liberals in Gallup polling done in the week of Jan. 13 to Jan. 19, according to data released by the polling company.
Sixty-two percent of self-described liberals told Gallup last week they do not approve of the job Obama is doing as president. That was down from 71 percent in the previous two weeks. Last week’s approval of 62 percent was the lowest job approval Obama has ever gotten from liberals in the Gallup poll.
Keep on reading…