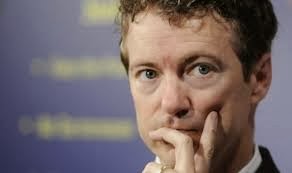 Sen. Rand Paul also points out Bill Clinton's lack of an ability to control himself could derail Hillary in 2016...


Sen. Rand Paul (R-Ky.) on Sunday accused former President Bill Clinton of “predatory” sexual behavior, saying he used the Oval Office to take advantage of Monica Lewinsky.
“I think, really, the media seems to have given President Clinton a pass on this,” Paul said on NBC’s “Meet the Press.” “He took advantage of a girl that was 20 years old and an intern in his office. There is no excuse for that and that is predatory behavior and …  we shouldn’t want to associate with people who would take advantage of a young girl in his office.”
In an interview with Vogue magazine, Paul’s wife, Kelley, said Hillary Clinton’s potential presidential run could be derailed by her husband’s “predatory” behavior while in office.
“I would say his behavior was predatory, offensive to women,” she said.
Paul on Sunday said he agreed with his wife.
“The Democrats – one of the big issues they’ve concocted is saying Republicans are committing a war on women,” he said. “One of the workplace laws and rules that, I think, is good is that bosses shouldn’t prey on young interns in their office.”