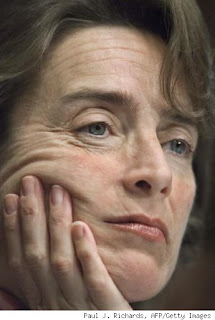 In a blow to unions and progressives, Arkansas Senator Blanche Lincoln survived yesterday's democratic primary and will face GOP Nominee John Boozman. Lincoln will need a miracle to defeat Boozman this November. The RCP polling average has Boozman up by 25 points in a head-to-head match-up against Lincoln.

Blanche Lincoln just beat Bill Halter in the Arkansas Democratic primary, according to the AP, also dealing a substantial blow to Washington’s conventional wisdom and to the labor unions who went all out to defeat her. The defeat is a real rebuke to a united progressive left, whose silver lining is having pushed Lincoln to the left on the financial reform bill.

The winner, aside from Lincoln: Bill Clinton, who stumped hard for her against what he portrayed as outside forces, and who seems to carry some real sway in his home state. . . .