Report: CIA is now delivering weapons to rebels in Syria 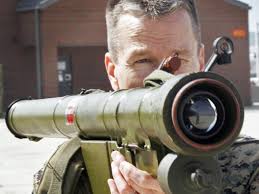 Bashar al-Assad is a bad man. Al Qaeda is with the rebels.  Am I the only one hoping the all kill each other?


The CIA has begun delivering weapons to rebels in Syria, ending months of delay in lethal aid that had been promised by the Obama administration, according to U.S. officials and Syrian figures. The shipments began streaming into the country over the past two weeks, along with separate deliveries by the State Department of vehicles and other gear — a flow of material that marks a major escalation of the U.S. role in Syria’s civil war.
The arms shipments, which are limited to light weapons and other munitions that can be tracked, began arriving in Syria at a moment of heightened tensions over threats by President Obama to order missile strikes to punish the regime of Bashar al-Assad for his alleged use of chemical weapons in a deadly attack near Damascus last month.
The arms are being delivered as the United States is also shipping new types of nonlethal gear to rebels. That aid includes vehicles, sophisticated communications equipment and advanced combat medical kits.
U.S. officials hope that, taken together, the weapons and gear will boost the profile and prowess of rebel fighters in a conflict that started about 21 / 2 years ago. Keep on reading...