A shocking example of how Team Obama and supporters used the power of government to punish conservative political activists... 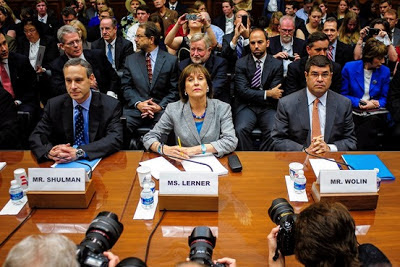 If reading this doesn't make you angry, you aren't a freedom-loving American...


In July 2010 she sent applications to the IRS for tax-exempt status. What followed was not the harassment, intrusiveness and delay we're now used to hearing of. The U.S. government came down on her with full force.

In December 2010 the FBI came to ask about a person who'd attended a King Street Patriots function. In January 2011 the FBI had more questions. The same month the IRS audited her business tax returns. In May 2011 the FBI called again for a general inquiry about King Street Patriots. In June 2011 Engelbrecht's personal tax returns were audited and the FBI called again. In October 2011 a round of questions on True the Vote. In November 2011 another call from the FBI. The next month, more questions from the FBI. In February 2012 a third round of IRS questions on True the Vote. In February 2012 a first round of questions on King Street Patriots. The same month the Bureau of Alcohol, Tobacco and Firearms did an unscheduled audit of her business. (It had a license to make firearms but didn't make them.) In July 2012 the Occupational Safety and Health Administration did an unscheduled audit. In November 2012 more IRS questions on True the Vote. In March 2013, more questions. In April 2013 a second ATF audit.

All this because she requested tax-exempt status for a local conservative group and for one that registers voters and tries to get dead people off the rolls. Her attorney, Cleta Mitchell, who provided the timeline above, told me: "These people, they are just regular Americans. They try to get dead people off the voter rolls, you would think that they are serial killers."

This week Ms. Engelbrecht, who still hasn't received her exemptions, sued the IRS.

Please read it all...

Many liberals like to claim conservatives suffer from paranoid fantasies, but if the government is really out to get you, you aren't paranoid.
Posted by Bluegrass Pundit at 8:30:00 AM