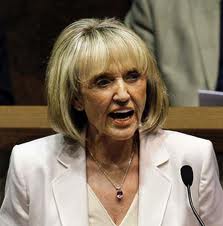 
Making good on a threat to veto all legislation until the Arizona legislature approved a 2014 budget and passed Medicaid expansion, Brewer shredded five bills, including one allowing people to sue over violations of religious freedoms, and another detailing plans for failing schools.

Brewer was brazen over the cause: “I warned that I would not sign additional measures into law until we see resolution of the two most pressing issues facing us: adoption of a fiscal 2014 state budget and plan for Medicaid. It is disappointing I must demonstrate the moratorium was not an idle threat.”

The governor savaged her state’s legislature, which she said had been in session for 130 days without passing a budget. “We have just five weeks until the end of the fiscal year,” Brewer wrote, “by which time it is necessary that the state of Arizona have a new budget in place in order to assure there is no suspension of critical services or programs.”

The Arizona Senate cobbled bipartisan support for the Medicaid bill last week, but the law has stalled in the House. Read more here...

Why stupid? I think the legislator are the stupid ones. She made good her threats.