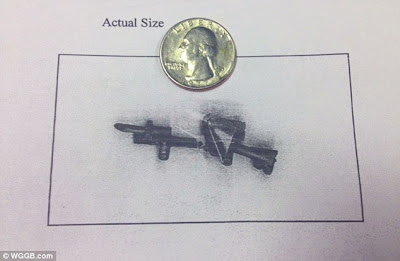 As crazy as many school districts are, he is lucky he wasn't tased and hauled off to jail...


A 6-year-old kindergartner sparked an uproar at his Massachusetts school when he was spotted brandishing a tiny plastic Lego gun on the school bus last week.

Mieke Crane, the child's mother, insists that officials at Old Mill Pond Elementary School in Palmer overreacted when another student saw the toy, which is slightly bigger than a quarter, and alerted the driver Friday.

'She [driver] said he caused quite a disturbance on the bus and that the children were traumatized,' Crane told the local station WGGB.

In the aftermath of the incident, the school sent a letter home to parents explaining what happened and stressing that there was no actual firearm aboard the bus, and that the students were never in any danger.

The missive was accompanied by a photo of the black toy gun showing its actual diminutive size.
Crane's son has been forced to write a letter of apology to the bus driver. He was also given detention Tuesday and could be temporary stripped off his busing privileges.