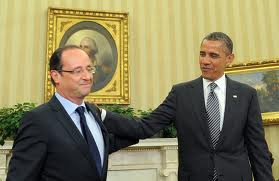 This time they want to tax salaries over €1 million at a 75% rate. This idea is making Barack Obama drool...

Businesses rather than employees will foot the bill for a new 75 percent tax on salaries over €1 million, French Finance Minister Pierre Moscovici said in an interview with Les Echos on Thursday, while a plan to cap directors’ pay has been dropped.
French businesses will face a 75 percent tax on employees’ salaries above €1 million a year under new legislation set to be introduced by the country’s government in 2014.

However, the government will stop short of introducing a cap on executive pay in the private sector, France’s Finance Minister Pierre Moscovici revealed in an interview with French daily Les Echos published on Thursday.