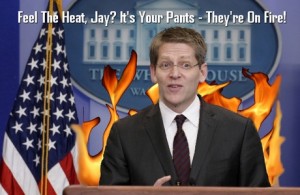 Jay Carney and Hillary Clinton are outed as liars...


The documents, first reported by THE WEEKLY STANDARD in articles here and here, directly contradict claims by White House press secretary Jay Carney and Secretary of State Hillary Clinton that the revisions of those talking points were driven by the intelligence community and show heavy input from top Obama administration officials, particularly those at the State Department.

The emails provide further detail about the rewriting of the talking points during a 24-hour period from midday September 14 to midday September 15. As THE WEEKLY STANDARD previously reported, a briefing from the Office of the Director of National Intelligence shows that the big changes came in three waves – internally at the CIA, after email feedback from top administration officials, and during or after a meeting of high-ranking intelligence and national security officials the following morning.