Marines sure are missing their hot meals in Afghanistan... 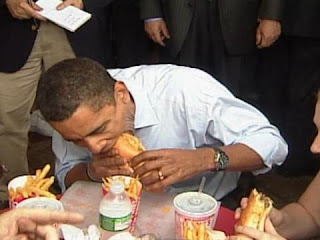 Well, I am sure Obama is still eating good...


Marines at Camp Leatherneck in Afghanistan will lose a key daily meal starting Saturday, causing some to forgo a hot breakfast and others to work six-plus hours without refueling on cooked food, according to Marines at the base and Marine Corps officials.

The midnight ration service — known there as “midrats” — supplies breakfast to Marines on midnight-to-noon shifts and dinner to Marines who are ending noon-to-midnight work periods. It’s described as one of the few times the Marines at Leatherneck can be together in one place.

The base, which is located in Afghanistan’s southwestern Helmand Province, flanked by Iran and Pakistan, also will remove its 24-hour sandwich bar. It plans to replace the dishes long offered at midnight with pre-packaged MREs, said Marine Corps Lt. Col. Cliff Gilmore, who has been deployed in Afghanistan since February.

The moves, though unpopular with many Marines on the ground and their families back home, are emblematic of the massive drawdown of American troops in Afghanistan and the dismantling of U.S. military facilities. More than 30,000 U.S. service members will leave Afghanistan in coming months as the U.S. prepares to hand responsibility for security to Afghan forces in 2014.