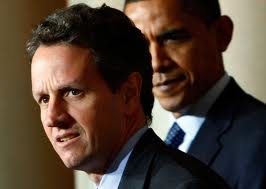 I wouldn't be surprised if the targeting of tea party groups for political gain goes all the way to the oval office...


WASHINGTON — The Treasury Department’s inspector general told senior Treasury officials in June 2012 he was auditing the Internal Revenue Service’s screening of politically active organizations seeking tax exemptions, disclosing for the first time on Friday that Obama administration officials were aware of the matter during the presidential campaign year.


At the first Congressional hearing into the I.R.S. scandal, J. Russell George, the Treasury inspector general for tax administration, told members of the House Ways and Means Committee that he informed the Treasury’s general counsel of his audit on June 4, and Deputy Treasury Secretary Neal Wolin “shortly thereafter.”

It remained unclear how much the disclosure would affect the broader debate over the I.R.S.'s problems. Complaints from Tea Party groups that the I.R.S. was singling them out became public in 2012, through media accounts.