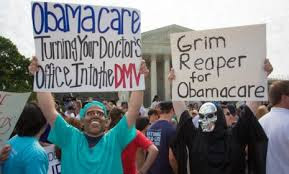 This number includes 55% of Independents and 30% of Democrats. Obamacare is going to be a huge issue in the 2014 midterm elections...


Majorities of American voters say their family will be worse off under the Affordable Care Act, and think it would be better to go back to the pre-ObamaCare health care system.

A Fox News poll released Wednesday finds that while 26 percent of voters say their health care situation will be better under the new law, twice as many — 53 percent — say it will be worse. Another 13 percent say it won’t make a difference.

That helps explains why a 56-percent majority wants to go back to the health care system that was in place in 2009. Some 34 percent would stick with the new law.

Three in ten Democrats would rather go back to the pre-ObamaCare system (30 percent). That view climbs to 55 percent among independents and 85 percent among Republicans.