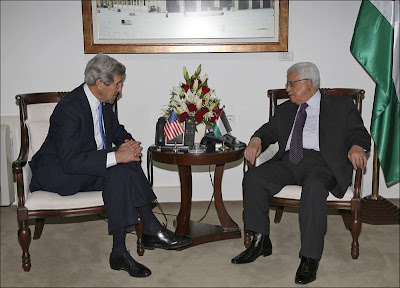 Lurch is playing fast and loose with our money...


John Kerry revealed his long-awaited plan for peace in the Middle East on Sunday, hinging on a $4bn (£2.6bn) investment in the Palestinian private sector.

The US secretary of state, speaking at the World Economic Forum on the Jordanian shores of the Dead Sea, told an audience including Israeli president Shimon Peres and Palestinian leader Mahmoud Abbas that an independent Palestinian economy is essential to achieving a sustainable peace.

Speaking under the conference banner “Breaking the Impasse”, Kerry announced a plan that he promised would be “bigger, bolder and more ambitious” than anything since the Oslo accords, more than 20 years ago.

The Palestinian Authority isn't interested unless it comes with Israel's head on a pole...


The Palestinian Authority on Monday rejected the idea of economic benefits in exchange for political concessions put forward by US Secretary of State John Kerry one day prior.
“The Palestinian leadership will not offer political concessions in exchange for economic benefits,” PA President Mahmoud Abbas’s economic adviser, Mohammad Mustafa, said in a statement, according to the Palestinian Ma’an news agency. “We will not accept that the economy is the primary and sole component.”

The statement came a day after US Secretary of State John Kerry announced a $4 billion investment plan meant to jumpstart both the Palestinian economy and peace talks with Israel.