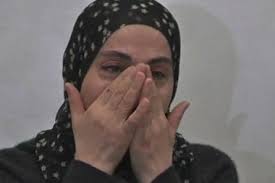 Boston Marathon bombing suspect Dzhokhar Tsarnaev is alive. that is more than he deserves...

“I am absolutely fine, my wounds are healing. Everything is in God’s hands. Be patient. Everything will be fine,” Dzhokhar Tsarnaev reportedly told his mother, according to Bloomberg News. [...]

“Mentally he is normal, but the child is shocked,” Tsarnaeva told Bloomberg News. “It was really hard to hear him and for him to hear me. The conversation was very quiet. It was my child. I know he is locked up like a dog, like an animal.”