Poll: Less than half of voters view President Obama as “honest and trustworthy.” 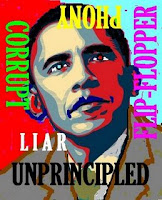 Democrats and women are still the most gullible...


The latest Quinnipiac University poll, published today, will send shivers through the White House, even though Washington is experiencing its first heat wave of the year. The Quinnipiac survey (hat tip: Jim Geraghty at The Campaign Spot) is the first major survey to show that the wave of recent scandals hitting the Obama administration are beginning to damage President Obama’s own standing with the American people.

According to Quinnipiac, Barack Obama’s job approval rating now stands at just 45 percent, with less than half of voters viewing the president as “honest and trustworthy.”
“President Barack Obama gets a negative 45 – 49 percent job approval rating, compared to 48 – 45 percent positive in a May 1 survey by the independent Quinnipiac (KWIN-uh-pe-ack) University, conducted before the IRS allegations surfaced.