Amusing: Democrats get binders and binders full of Obamacare propaganda... 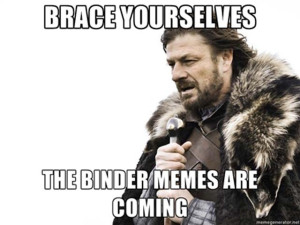 There aren't enough binders full of lies in the world to sell that pig to most voters...


House Republican leaders recently subjected their Democratic colleagues to the 37th vote in two and a half years to repeal “Obamacare.”

But heading into the week-long Memorial Day recess, Democratic leadership went on the offensive to prepare the rank and file to defend President Barack Obama’s 2010 health care law back home.

The Democratic Steering and Policy Committee sent members back to their districts last week armed with “Affordable Care Act Toolkits,” meticulously organized binders containing every piece of information lawmakers could possibly need to communicate the nuances of the law to their constituents.

“Reforming our health care system is an historic opportunity to make health care more affordable and bring the kind of change we were all elected to achieve for the American people,” Minority Leader Nancy Pelosi of California and committee co-chairmen Rosa DeLauro of Connecticut and Robert E. Andrews of New Jersey wrote in a May 22 introductory letter accompanying each toolkit, one of which was obtained by CQ Roll Call.

“Nothing could be more important,” the letter continues, “which is why we now want to educate our constituents about the new law, help to implement it, and strengthen the hands of those who have worked for this historic reform.”

In other words, the toolkits — the culmination of months of collaboration and coordination — are meant to help get Democrats “on message” about the law that’s consistently derided by the GOP as a government overreach that will kill jobs. It’s certainly not the first time Democrats have tried to retool their sales job on the health care law, as polls consistently show Democrats have yet to win over the public. CNN released a new poll on Monday showing 54 percent opposing Obamacare.