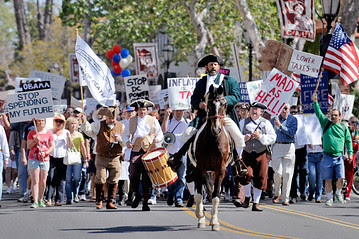 
Washington (CNN) - As a major tea party group plans protests Tuesday at Internal Revenue Service offices across the country Tuesday, a new national poll indicates that the IRS controversy has given the four-year-old movement a shot in the arm.
The week-and-a-half-old controversy, which involves the IRS targeting of tea party and other conservative groups which were seeking tax exempt status, has dominated headlines and put the White House on the defensive.

And according to a CNN/ORC International survey released Monday, it’s also boosted the favorable rating for the tea party movement. Thirty-seven percent of people questioned said they see the tea party in a favorable light, up nine percentage points from CNN’s March poll. But a plurality still view the movement unfavorably.

“Politically, the group that may have benefitted the most from last week’s news is the tea party movement, which may be getting something akin to a ‘sympathy vote’ for being targeted by the highly unpopular IRS,” says CNN Polling Director Keating Holland.
The 37% favorable rating for tea party is just one point shy of their all-time high in CNN polling, which they reached twice in 2010, during the heyday of the movement.