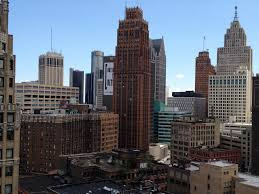 Many business are expected to consider this options. Why wouldn't cash strapped municipalities?  The unintended consequences of Obamacare keep growing.


Detroit is facing bankruptcy, and Chicago wants to cut retiree benefit costs. Both are turning to President Barack Obama’s health-care overhaul in what could become a road map for cash-strapped cities. …
“That will become an option that I think a lot of employers and a lot of cities would look at,” said Ario, now a managing director of Manatt Health Solutions, a Washington consulting firm that advises insurers. …
In Detroit, reducing benefits for 30,000 employees and retirees is part of Emergency Manager Kevyn Orr’s plan to avoid the largest U.S. municipal bankruptcy by erasing a $386 million deficit and attacking a long-term debt of at least $17 billion.
The city had 19,389 retirees eligible for health, life-insurance and death benefits as of June 30, 2011, according to Orr’s plan. The insurance benefits cost the city $177.4 million in fiscal 2012. Retirees contributed an additional $23.5 million.
Orr wants to give current and former workers health-reimbursement accounts. The city would pay from $100 to $250 a month to help with medical costs or premiums under the Patient Protection and Affordable Care Act, according to a proposal to city unions.
That would cost the city as little as $27.5 million annually, according to Orr’s plan.