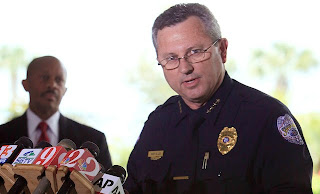 The entire arrest and trial of George Zimmerman has been a political effort to appease race-baiters like Al Sharpton.


(CNN) -- The George Zimmerman investigation was hijacked "in a number of ways" by outside forces, said the former police chief of Sanford, Florida.

Bill Lee, who testified Monday in Zimmerman's second-degree murder trial, told CNN's George Howell in an exclusive interview that he felt pressure from city officials to arrest Zimmerman to placate the public rather than as a matter of justice.

"It was (relayed) to me that they just wanted an arrest. They didn't care if it got dismissed later," he said. "You don't do that."

When Sanford police arrived on the scene on February 26, 2012, after Zimmerman fatally shot unarmed 17-year-old Trayvon Martin, they conducted a "sound" investigation, and the evidence provided no probable cause to arrest Zimmerman at the scene, he said.

It had nothing to do with Florida's controversial "Stand Your Ground" law, he said; from an investigative standpoint, it was purely a matter of self-defense.