Interesting: Wisconsin's largest teacher's union has lost half it's membership since workers aren't forced to join... 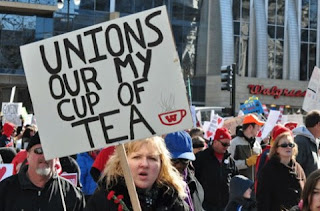 
Wisconsin Gov. Scott Walker says one of the goals behind Act 10, his landmark legislation that clipped the power of most public sector unions, was to give workers more freedom to decide if they wanted to belong to a union.
He’s apparently accomplished his mission. Several of the largest public sector unions in the state have lost thousands of members over the past few years, and a great deal of wealth and political power, as well.
The Wisconsin Education Association Council, the state’s largest teachers union, lost about half of its 98,000 members since Act 10 became law in 2011, according to the Milwaukee Journal Sentinel.
That means WEAC has lot approximately half of its annual income from membership dues, which has impacted its ability to remain a force on the state political scene.