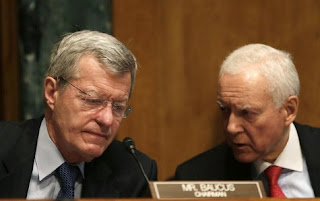 I foresee another bill about to be passed in the middle of the night without being read...


The Senate’s top tax writers have promised their colleagues 50 years worth of secrecy in exchange for suggestions on what deductions and credits to preserve in tax reform.
Senate Finance Committee Chairman Max Baucus (D-Mont.) and the panel’s top Republican, Sen. Orrin Hatch (Utah), assured lawmakers that any submission they receive will be kept under lock and key by the committee and the National Archives until the end of 2064.
Deeming the submissions confidential, the Senate’s top tax writers have said only certain staff members — 10 in all — will get direct access to a senator’s written suggestions. Each submission will also be given its own ID number and be kept on password-protected servers, with printed versions kept in locked safes.
The promise of confidentiality was revealed just two days before the deadline for senators to participate in the Finance Committee’s “blank slate” process, which puts the onus on lawmakers to argue for what credits and deductions should be kept in a streamlined tax code.