The wheels are coming off Bloomberg's Mayors Against Illegal Guns bus... 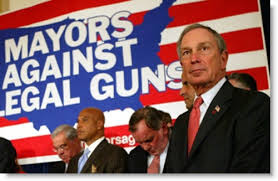 Anyone not living in a liberal la la land who associates with Bloomberg on any issue is insane...


New York Mayor Michael Bloomberg’s gun control group Mayors Against Illegal Guns is finding it hard to keep its membership up, thanks to dozens of resignations and lost elections over the last few months.
Worse for Bloomberg, who has become one of the faces of the gun control movement: the people replacing his lost comrades aren’t particularly eager to sign up with the organization, a rare group battling in the trenches against the well-organized and deep-pocketed National Rifle Association. Some appear not quite to have signed on for that level of political heat.
“The original focus, I thought, was going to be on focusing on better on enforcement of our existing laws, and if anything, we have talked about not getting involved with things like banning assault weapons and banning magazine clips,” said Rockford, Il. Mayor Lawrence Morrissey, who left the group in June because, he said at a town hall meeting, the group had veered from what he originally thought it was about.
Bloomberg’s group has come under fire recently for naming murder suspects, including Boston bomber Tamerlan Tsarnaev, in its list of victims of gun violence and for hosting its website on New York City government servers.
According to an old version of its member list, saved on a blog dated back to late February, more than 50 mayors who were then listed on MAIG’s website are no longer there. Most of the mayors whose names are no longer affiliated with the group are off the list either because they resigned or lost an election, but others have specifically asked to be removed.
Keep on reading…